A lady, Jessica Nabongo has become the very first black woman to visit all the 193 countries in the world.
Some people set records by jumping the highest or running the fastest.
But for Jessica Nabongo, a UN employee turned travel blogger, it’s by becoming the first black woman to visit every country on Earth.
She set out to visit all 193 countries in the world in 2016, and on October 6 arrived the last on her list, Seychelles, according to a post on her Instagram page. She also clocked up a couple of what the UN calls “non-observer status” territories, taking her total to 195.

“Welcome to the Seychelles!! Country 195 of 195! So much to say but for now I will just say thank you to this entire community for all of your support. This was our journey and thanks to all of you who came along for the ride!!,” she wrote.
Born in Detroit to Ugandan parents and holding two passports, Nabongo’s epic odyssey hasn’t just been about getting her name in a record book.
She’s hoping to pave the way for women and people of color to do the same.
Although she felt like she’d achieved “the American dream” by landing a six-figure job at a pharmaceutical company after college and buying her own place in the Motor City, the work didn’t satisfy her.
She began renting out her condo to make money, then hit the road — first, teaching English in Japan, then grad school at the London School of Economics, followed by a job at the United Nations that took her to Benin and then Italy. But that wasn’t enough to sate the travel bug.
But simply being able to afford a ticket doesn’t mean that travel is easy or seamless. 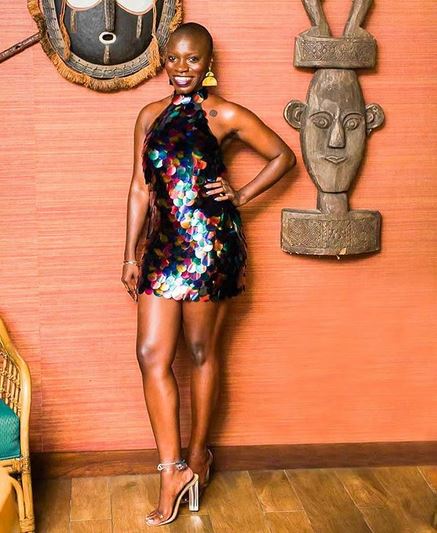 Nabongo’s experience traveling the world undercut many of the exhortations travel brands have to “live like a local,” being able to seamlessly blend in anywhere simply by changing clothes or ordering coffee a certain way.
Often, as the only person of color in a crowd, she stood out whether she wanted to or not. Nabongo also has dark skin and shaves her head.
To date, there are about 150 known people who have been to every country, the majority of whom are white men traveling on European passports — the ones who have the option to “blend in” in more places.
As of April 2018, there were 193 recognized countries in the United Nations, plus two with “non-observer status.”
Nabongo visited them all. Her passports have stamps from places as far-flung as Nigeria, Cuba, Turkey and Laos.
To support her travel habits, she founded a company called Jet Black, which organizes custom itineraries for small group trips in Africa, plus sells travel gear like branded T-shirts and passport covers.
As an influencer, she also works with hotel and hospitality brands, some of whom offer up free stays in exchange for social media posts. She also accepts donations on a GoFundMe page.

Any Lady That Will Get Involved In A Relationship With My Husband, I Will Bring That Person Into The Media And Disgrace Her – NAYAS Warns