Correspondence from the Upper East Region

A VIP bus with registration number AS 9683-19, has ran over two friends in Navrongo, killing one on the spot and leaving the other in a near-death condition.

The friends, one of whom is an officer with the forestry commission, are indigenes of Chiana in the Kassena-Nankana West District who were returning home after purchasing a new Apsonic motorbike from the Navrongo market.

The new motorcycle belonged to the deceased who had procured it with a loan he received same day he died in the accident.

According to an eyewitness account, the two were joining the Navrongo –Sandema highway at the Mayaga Junction when the bus at top speed from the Sandema hit and trapped them under the moving vehicle.

The eyewitness told GhanaWeb’s Senyalah Castro, that the bus dragged them for half a metre before they fell off lifeless. One of the victims was severely dismembered. The accident happened Friday evening around 5pm.

The incident threw a huge crowd which quickly transported one of the victims with severe injury to the head to the War Memorial Hospital.

Personnel of the Motor Traffic and Transport Department (MTTD) of the Navrongo Police Command later arrived at the scene to collect the remains of the deceased.

The Mayaga Junction in Navrongo has become a hotspot for accidents due to the lack of traffic lights to control the flow of vehicles. The tragedy has resurrected calls for the installation of the facility at that spot and the rest of the township to prevent the occurrence of accidents. 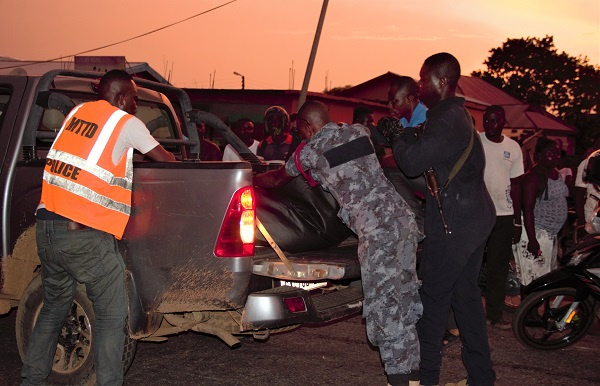 The junction is also riddled with resurfacing potholes despite recent efforts by the Municipal Assembly to fix them. The potholes are causing accidents.

“I nearly got involved in an accident here last week. It would have been very tragic but God saved me. I was coming from home and nearly got hit by a vehicle. I intend to go to Nabiina Radio to educate and let people know that the road from the Prisons side is a highway and people must always be careful when approaching the it”. Parkins Adda, a resident said whilst shaking his head in shock.

Obinim flaunts $100 notes as he celebrates release from police custody