A suspected thief was almost beaten to death by an angy mob in Elebele, Ogbia Council Area of Bayelsa State.

It was gathered that the suspect identified as Victor from Emeyal community and his gang members allegedly stole from one Sunday Eze and attacked him with a machete. 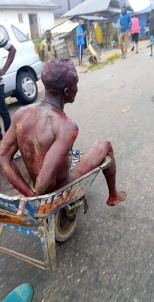 While his gang members managed to escape, Victor was caught and brutally beaten up. Seriously injured and bleeding profusely, the mob put the suspect in a wheelbarrow and paraded him around the community.

Victor and his gang are said to have been terrorising the community.

Cars being cleared for GH¢14 on ‘quack’ UNIPASS platform – IMANI