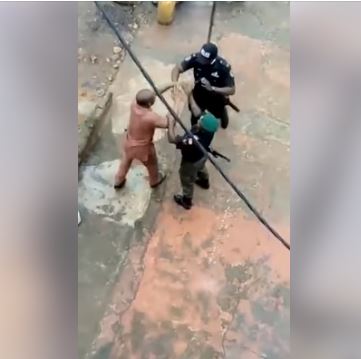 Police officers beating lawyer in Anambra
Some men of the Nigerian police have been filmed assaulting a lawyer in Onitsha, Anambra state.
In the video posted online by a Facebook user, Ben Chuks Udoh, the policemen could be seen charging at the lawyer and asking him “what was his concern” before unleashing blows on his body.
It needed the help of other police officers before the man could be rescued from the powerdrunk officers.
Watch video below:

McBrown yelled at me, asked me to shut up – Nana Yaa Brefo