The Minister of Tourism, Arts and Culture, Hon. Barbara Oteng-Gyasi has led some officials of the Tourism Ministry to inspects the site for the construction of one of the most iconic and ambitious projects in the history of Ghana’s Tourism sector, which is estimated at 1.2 billion U.S Dollars.

This massive project is going to be a game-changer in turning the fortunes of Tourism in Ghana, thereby improving  on the country’s GDP.

The project which is dubbed the “Marine Drive Tourism and Investment Project,” is under the auspices of the Ministry of Tourism Arts and Culture, in collaboration with the Ghana Tourism Authority (GTA) and the Ghana Tourism Development Company (GTDC) and is expected to create 36 thousand (36,000) jobs during the first phase of the project and subsequently engage about One Hundred and Fifty Thousand (150,000) both skills and unskilled personnel’s upon completion.

Hon, Barbara Oteng Gyasi, made the inspection tour at the Marine Drive project site on the 6th Sep 2019, in Accra.

She expressed her satisfaction that the project which began date back during the President Kwame Nkruma,s era will see to its realization given the unwavering commitment by His Excellency, Nana Addo Dankwa Akuffo Addo,to better the lot of citizenry in the country.

The Tourism minister, who also doubles as the Member of Parliament (MP) for the Prestea Huni Valley Constituency, Charged on her team responsible for the execution of the project to live up to their bidden and be part of history as far as the implementation of the project is a concern.

She indicated that a lot of investors in the hospitality industry are showing  huge interest in the Marine Drive Project, because of its significant prospects, whiles urging that all quest should be made to ensure that the project becomes a reality.

Briefing the delegation, the Managing Director of the Attaché Construction Firm Limited Mr. Kwame Attah Acheampong, who is one of the Anchor developers on the project, stressed that work is steadily on course as expected, since most of the building structures on the site has been cleared to pave way for the construction of the project.

The Project Coordinator of the Marine Drive Project Mr. Frederick Frimpong, also indicated  that about 80 per cent of the site clearing is been executed after which the project construction will take place fully.

The objective of the marine drive project is to decongest Accra city Centre, Re-instate land for a befitting status of the Capital City, and attract investment in the city Centre for Businesses and Leisure purposes.

Marine Drive project, was first mooted by Ghana’s first President Since 1963, and In 2014, the then Tourism, Culture and Creative Arts Minister, Mrs Elizabeth Ofosu-Adjare, took it a step further by getting Cabinet’s approval. But again, it stalled because of challenges with the allodial owners of the land.

Between 2002 and 2005, the late Minister of Tourism and Modernization of the Capital City, Mr Jake Obetsebi-Lamptey, also moved the project a step further by helping to put a design of the project on paper and subsequently to the current feat. 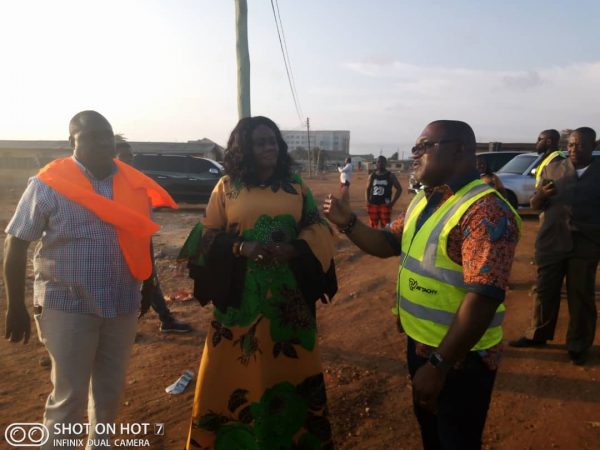 The project is anchored on the vision of changing the face of tourism in Ghana and when completed, is expected to feature Hotels, Restaurants, Amusement Parks, and a Cultural village, Recreational Centres, Malls and a Convention Centre.

The project is expected to cover a total of 241 acres of land, which stretches from the Accra Osu Christiansburg Castle to the Arts Center in the Gamashie enclave which is under the Public-Private Partnership (PPP) arraignment.

As part of the project, a Monument would be built in honour of the Big Six, for their significant contribution to the development of the country.

Meanwhile, the officials who accompanied Hon. Barbara Oteng-Gyasi to the site were The Deputy Minister of Tourism, Arts and Culture, DR Ziblim Iddi Barri, The Chief Director of the Ministry Alhaji Abudulai Yakubu, The Director of the Human resource of MoTAC, Mr Vitus Otto Langmagne  and the Public Relations officer ofMoTAC Mr. Alhassan Abubakar Sadik.